The practice of Hadi Zambarakji

Retinal vein occlusion (RVO) is the second most common retinal vascular disease after diabetic retinopathy. Macular edema leads to vision loss in many patients with either central or branch retinal vein occlusions (CRVO or BRVO). BRVO (Figure 1) is the more common of the two presentations, accounting for approximately 80% of RVO.

There has been no proven treatment for CRVO (figure 2); the Central Vein Occlusion Study (CVOS) found no visual acuity benefit of laser photocoagulation over observation in patients with CRVO. Laser treatment of BRVO resulted in improvement in vision in patients with BRVO. However, the disease is self-limiting in about one-third of BRVO cases, so historically patients were usually observed for several months after initial presentation. 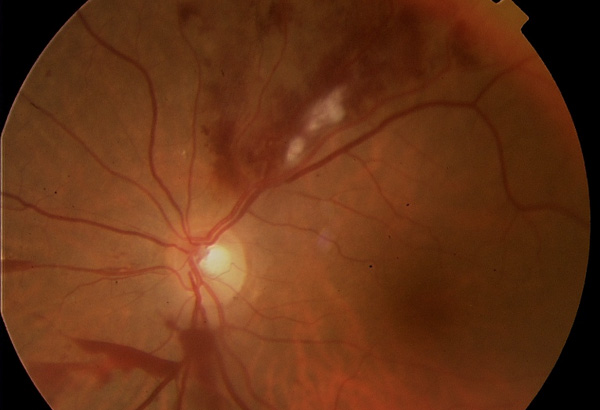 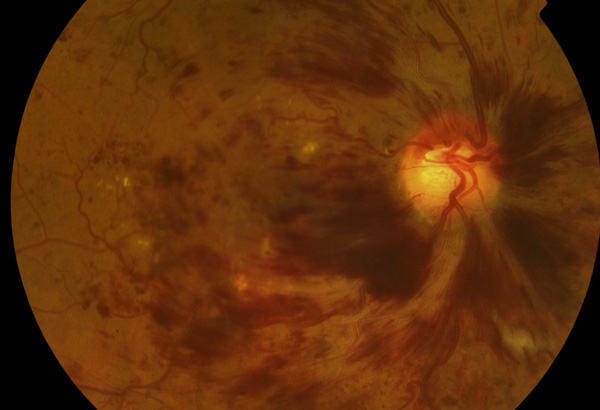 Recently, there has been interest in the use of vascular endothelial growth factor (VEGF) inhibition in the treatment of RVO because of the observation of increased VEGF in the eye of patients with these conditions. Two randomized controlled trials assessed the efficacy and safety of intravitreal ranibizumab (Lucentis, Genentech) in BRVO and CRVO. The results showed that with intensive, monthly treatment, patients achieve very good results, superior to what we have seen previously with other treatment modalities.

Short summary: In two clinical trials, patients with macular edema due to RVO given ranibizumab had, on average, clinically and statistically significant improvements in visual acuity compared with patients receiving sham injections.

The safety profiles of both trials were similar to those of previous trials of ranibizumab intravitreal injection in patients with macular degeneration. Safety events in both trials were uncommon. Serious adverse events included, in BRAVO, one retinal detachment and one case of endophthalmitis, and in CRUISE, one case of vitreous hemorrhage in the sham group. No endophthalmitis occurred in any group in CRUISE.

IMPLICATIONS TO CLINICAL PRACTICE: Ranibizumab results in visual improvements for both BRVO and CRVO. However, a significant number of retina specialists are nevertheless using off-label intravitreal bevacizumab as first-line therapy for CRVO and BRVO.

WHEN TO TREAT?  Some physicians feel that, if the disease will resolve spontaneously in a third of patients, maybe some period of time should elapse before we initiate treatment. However, initial subgroup analysis from BRAVO and CRUISE show that no matter the duration of the disease, Lucentis-treated patients did better than sham-treated patients. “When to treat” may therefore vary depending on the need for “early visual improvement”.

As with any treatment, the risk-benefit ratio must be considered. In these studies the rates of adverse events were low, but the benefit rate was high. So from the point of risk-benefit ratio there is not a great rationale for delaying treatment, unless the patient’s other eye is healthy and the RVO is not affecting lifestyle. On the other hand, patients with RVO can potentially tolerate more time with edema (compared to patients with other conditions such as macular degeneration) before permanent vision loss occurs. Therefore, treatment for RVO may be delayed 3 months without great risk if the patient and physician choose to do so.

DOSING SCHEDULE: Once the decision is made to treat with an anti-VEGF agent, a dosing strategy must be devised.

In patients with persistent edema, however, treatment must continue or the benefit will be lost. In patients with BRVO who require continued treatment, laser photocoagulation may also be beneficial.

Dexamethasone is a potent corticosteroid that has been shown to suppress inflammation resulting in decreased macular oedema, fibrin deposition, capillary leakage and migration of inflammatory cells. Vascular endothelial growth factor (VEGF) is a cytokine that is expressed at increased concentrations in the setting of macular oedema and a potent promoter of vascular permeability. Corticosteroids have been shown to inhibit the expression of VEGF. Additionally, corticosteroids reduce the release of prostaglandins, some of which have been identified as mediators of cystoid macular oedema.

The GENEVA trial evaluated the safety and efficacy of 1 or 2 treatments with the dexamethasone intravitreal implant (DEX implant) over 12 months in eyes with macular edema owing to branch or central retinal vein occlusion (BRVO or CRVO). The trial design consisted of 2 prospective studies including a randomized, 6-month, double-masked, sham-controlled phase followed by a 6-month open-label extension.

Except for cataract, the incidence of ocular adverse events was similar in patients who received their first or second DEX implant. Over 12 months, cataract progression occurred in 30% or 302 patients that received 2 DEX implant 0.7 mg injections versus 5.7% or 88 sham treated eyes. Overall, cataract surgery was performed in 4 of 302 (1.3%) and 1 of 88 (1.1%) eyes, respectively. In the group receiving two DEX implants (341 patients), a 10-mmHg intraocular pressure (IOP) increase from baseline was observed in 12.6% (after the first treatment), and 15.4% (after the second treatment). The IOP increases were usually transient and controlled with medication or observation; an additional 10.3% of patients initiated IOP-lowering medications after the second treatment.

Visual acuity outcomes: A15-letter improvement in visual acuity from baseline was achieved by 30% of patients 60 days after the first and second DEX implant.

The study concluded that patients with macular edema owing to BRVO or CRVO, single and repeated treatment with the DEX implant had a favorable safety profile over 12 months. In patients who qualified for and received 2 DEX implant injections, the efficacy and safety of the 2 implants were similar with the exception of cataract.

CHOICE OF LUCENTIS, AVASTIN or OZURDEX (DEX implant)? Regarding the choice of the anti-VEGF agent, there are several trials in Europe and the US testing the efficacy of ranibizumab (Lucentis) versus bevacizumab (Avastin) in macular degeneration (see handout on macular degenration). The results of these trials may shed some light on the relative efficacy of these two agents in other diseases. Case series however indicate that there is a definite response to Avastin in RVO, but we do not know if it is inferior, superior, or equal to Lucentis.

At the time of writing, in the UK, NICE has approved the use of Ozurdex only for the treatment of macular oedema secondary to BRVO or CRVO. The predominant advantage of Ozurdex is the reduced number of injections needed over 1-2 years, but the obvious additional concerns relate to the need for using intraocular pressure lowering medications in a quarter of patients, and the added risk of cataract progression if repeat treatment is needed.

Guide to Flashes and Floaters

Guide to Vitrectomy for Floaters